If judgement looms under every steeple, if lofty glances from lofty people, can’t see past her scarlet letter, and we never even met her.

I love the Casting Crowns video above because it shows what the church can be and far too often is, but also what it’s supposed to be. Initially, the people at the church throw lofty glances at the woman or try to scoot away from her. But at the end, one girl approaches the main character with a sympathetic hand and sympathetic word.

I wrote a post a few days ago called “The Church Culture of Shame” describing my thoughts on how much the church seems to lack any sense of grace with some people, particularly those within the body of Christ. I’m flattered by the amount of people that read it and have complimented me on it. Thank you, to all of you. It means more than you know.

But as I was driving to get lunch today, I thought of a different phrase – “the church culture of compassion.” It may come across to some who read that last post that I don’t think such a thing exists. But as I thought about that phrase, some examples came to mind. Let me share them with you here. I hope you are encouraged.

Compassion is the emotion that one feels in response to the suffering of others that motivates a desire to help. Compassion is really the act of going out of your way to help physical, spiritual, or emotional hurts or pains of another. (Wikipedia)

We believe that Jesus meets people where they are. We don’t subscribe to the belief system that God only loves those who live the way we or religion think they should live. We believe that it is when Jesus meets, loves and accepts us where we are, no matter that place that we are transformed by that crazy kind of love. – XXXchurch.com

And people call themselves Christians, with “God hates fags” written all over their pickets. They play the Holy Spirit and judge people because of the way they sin different. Social Club will always be the difference. I have gay friends and I’m not ashamed to say it, and I love ’em like Christ did and people are gonna hate it. They know what I believe and they might not agree, but I stand as living proof, look what God did to me.  – Social Club, “Grace Song”

The attitude that Christian rap group Social Club takes in their songs is not one of judgement or of condemnation, but of love. Their call is for the “misfits,” the ones who may not be accepted by the masses. In the “About Us” section of their Tumblr page, they define a misfit: “A misfit by definition is someone who is ‘different than their surroundings.’ Simply put, we believe in being who Jesus has called us to be and not who the world wants us to be.”

In a church culture that seems to care a lot more than we should about appearances, they don’t care.

“One thing we wanted to do is create an environment of openness and accountability…for the gospel,” group member Marty said in an interview with Rapzilla. “We do life music. We don’t do music that is centered around anything other than our lives…We focus on the misfits and the kids that feel like they didn’t fit in.”

The Christian rap genre as a whole does a great job of showing compassion to all, generally not taking a stance of “we’re better than you,” but seeking to be real and honest and showing compassion in that way. They’re also willing to go to the places others might not be willing to. A group of rappers from the label Reach Records visited Riker’s Island Prison in New York to do a concert and minister to the inmates. 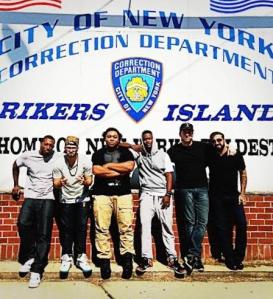 “We were reminding people of their value and their worth, and it’s not defined by what society says about us but the intrinsic worth that we have in God, being made in His image,” Andy Mineo said in an interview with Wade-O Radio.

How many other Christian artists would take a trip to one of the most notably worst prisons in America? I don’t think many would.

I’m going to share one more story of compassion that you can find in the church. It’s the story of a guy named Zacch.

See, Zacch lived in the city of Jericho working for the government. Something like the IRS. Except he was super corrupt. He stole money from people. Legally. He had everything he thought he needed. He was hated by the religious leaders of the day. Not unlike how some Christians these days view the government of the United States of America.

Then one day a teacher came along. He was pretty popular, almost like a rockstar. Zacch stood on a crowded street, trying to see this teacher. But he was short, so he couldn’t see him. Solution: climb up in a tree. Zacch sat in the tree like Joseph Gordon-Levitt in Angels in the Outfield, peering out trying to see this guy he had heard about.

The teacher walked by and saw Zacch sitting in the tree. Now, this teacher was a Jewish one who talked about Yahweh, the God of the Torah. A religious guy. I don’t know for sure, but Zacch may have assumed that this teacher thought the worst about him. But, looking at Zacch, the teacher said, “Zacch, come on down, man. Let’s grab some food at your place.”

Joyfully, Zacch leapt down from the tree and practically dragged the teacher to his home. He was filled with joy. After talking with the teacher, Zacch made up his mind. He said: “Half of my goods, I give to the poor. And if I have defrauded anyone of anything, I restore it fourfold” (Luke 19:8).

And the teacher responded, “Today salvation has come to this house, since he also is a son of Abraham. For the Son of Man came to seek and to save the lost” (Luke 19:9-10).

I’ll end with a quote from Tullian Tchividjian’s One Way Love:

Jesus is not being cavalier about wrongdoing or suggesting that greed, and its fallout, is not a big deal. He shed tears over our sin; he came to suffer and die for it. No, this is Jesus identifying with the sinner and loving those who least deserve it. He knows that the only way to break the cycle of retribution and oppression and heartbreak is to demolish the ladder of deserving altogether…God lavishes His grace on the foolish, the weak, the despised, and the nothings so He alone will get the glory. (p. 131-132)